Our customer, Ingo Nadler from Hashplay Inc.,
reached out to Onix’ Unity team with the idea
of developing an AHTS VR game that would
provide a fully immersive user experience and
use realistic water and vessel physics effects.

The customer was pursuing the goal of
building a simulator VR app that would be
fascinating to use and visually stunning. Ingo
provided ship sketches, specific ship model
examples, and vessel architecture parameters
(weight, speed, number and types of engines). 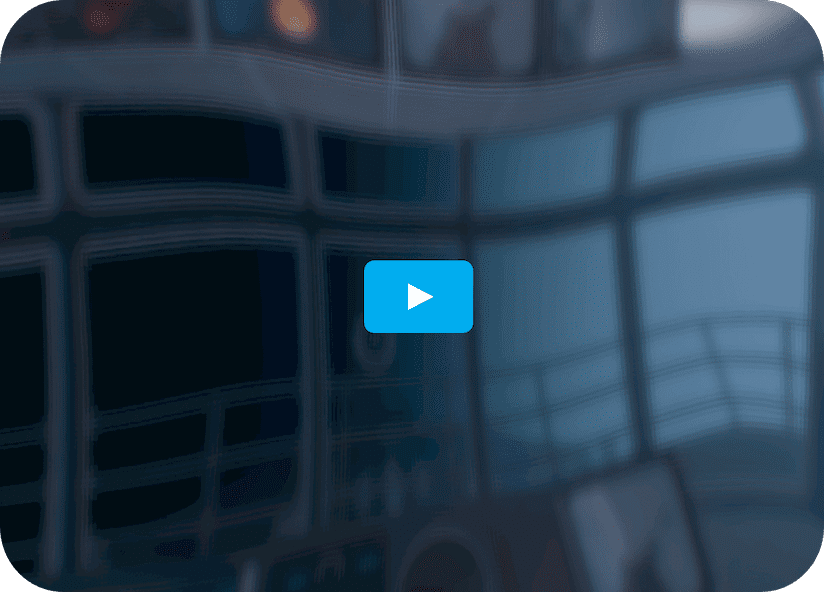 Our task was to study the supporting material and make sure we had all the information that
would help us recreate moves of a real 3,000-ton vessel navigating in high seas.

Before beginning our work on this VR project, we’ve conducted a market research to determine whether there are any similar VR solutions or apps and how we could make our simulator game a better experience for a user. We found out that such-like apps existed, but they didn’t support a VR experience.

Our goal was to create a VR simulator app that
considered the water physics, the anchor
handling tug supply vessel architecture, ship and
engines behavior under different weather
conditions (stormy or calm).

This simulator game has been completed
and displayed as a demo for the booth at
Hashplay CeBit 2017 held in Tokyo. It was
also deployed to Hashplay Steam and
VivePort to be used in training and
simulation.

Applying the water physics laws, real ship maneuvering effects, ship modeling, weather changes,
and the drowning effect are some of the biggest VR challenges for this simulation game.

The oil rig was remodeled several times to include different levels of detail - when the ship gets
close to the rig, the model’s quality improves, if the ship moves away from the rig, the quality
blurs.

For the sky, we worked on the effects that would allow making it immediately sunny when the sea
is calm or making it cloudy once the storm arrives. To create water, we used a ready-to-use
pattern that was provided by Ingo, but we worked on the shades to add the sea depth and water
reflections.

The customer provided the design for the app, so our team was mostly focused on the
development part. We added occasional changes to the design to ensure a smooth VR user
experience. Also, the Unity team designed and built the app’s interface, action buttons, and
shaders.

The ship simulator has two visual heroes that have to look exceptionally good:

- The ship bridge for the captain with displays and controls.
- The water with waves, foam, and spray on the windows.

For the app, we used the advanced water and sky shaders, detailed and animated maps for foam
and water on windows and particle systems.

To interact with bridge controls, the captain uses a Vive controller. When a user looks at a bridge
control, it is highlighted to show when there is one to use.

Control is performed via pointing and clicking on a ship control to modify it. The Vive controller is
used as a “joystick” or “power lever” in the air to move the control. Zero position gets a short
vibrate feedback.

When the player selects the water-gun control, they are put close to the window and get a direct
control (crosshair control.trigger shoots a water pulse).

There are four stations to go or turn to (with Vive tracking):

On the bridge, there are no seats, except for one central seat with the tracks in the floor. In the
simulation, the user will be able to actually walk from one control desk to another.

Screens in the game are mostly real-time and include:

For whom this product is

The targeted audience is a VR user that enjoys challenging sea adventures that bring them to a
world much resembling the conditions of the real world.

User flow of the app

The goal of the simulation game is to steer the ship to the oil rig, avoid traffic, put out any fires
using the water guns and keep the ship within the marked area for 10 seconds. A user brings the
aft of the vessel next to the buoy, so its crane can grab it and pull up the anchor, without bumping
into the oil rig.

During the mission, a user becomes the ship’s captain. Specifically, the task is to capture an oil
rig’s anchor, which is anywhere close to the platform and marked with an orange buoy and
complete the mission as quickly as possible. A timer for the game is set to provide no more than
10 minutes to complete the game. If a user doesn’t succeed, the game ends with the two of
possible scenarios: they run out of time or the ship may sink.

During the action, Star Wars Tie Fighters (UFO) try to shoot the anchor winch and the captain has
to move to the gunning station (by using HTC Vive controllers to shoot them down). Occasionally,
a user would see a whale swimming in the sea and seagulls in the sky.

The captain brings the AHTS close to the rig and positions the ship so that its stern anchor crane
remains above the buoy +-3m for at least 10 seconds (the timer looks like a green bar that gets
shorter and shows the remaining seconds inside).

After each successful mission completion, the wind and sea motion on the next mission get
stronger, the calm sea grows stormy and windy. A collision with the oil rig may damage the ship
that would dramatically sink with some red flares firing. In this case, the last thing a user would
see is the bridge glass breaking and glass particles spraying in.

When the application starts first and the user has put the
headset on, they are flying with the
seagulls in circles around the ship. In the distance (fog),
they can see the oil rig with the blinking
lights but no details. While they are flying, the menu
appears. The game opens with the background music and
seagulls/wind sounds.

In the menu, a user can select the difficulty marked from 1
(a calm sunny weather, no wind) to 9 (a very stormy
weather). Once the difficulty is selected, the
sea and the
weather immediately change.

When a user clicks ‘Start Mission’, the mission music begins
and the screen fades to the white fog that moves the
captain to the bridge at the main position and the screen
fades back to normal.

WThe introduction to the mission is started with audio
voice-overs and highlighting the corresponding controls.
After each step, the user clicks on “Understood’ button.

The simulation is a race against time. After clicking ‘Start
Mission’, a big red digital timer starts the countdown from
10 minutes in the bridge console.

The captain sets the course by going to the navigation
console and clicking on the map to set the course.

To reach the oil rig- safely, a user selects an initial distance
while getting familiar with the bridge, so that pushing the
main engines gets them there in no more than 2 minutes.

If a user sets the course to the oil rig and forgets about the brake (by pushing the main engines
backward), they will slam into the rig and sink the ship. Also, strong winds from a random
direction change the course over time slightly.

When a user gets close to the rig (the distance is around 30 meters), they see the
orange buoy in the water. Now a user has to use the bow and stern thrusters to put the ship’s
aft next to the buoy. When the crane is over the buoy, we show a five-meter large circle in the
water and a five-seconds countdown timer and bar graph. The captain keeps the crane within
the circle that time, so the crew can fix the crane to it.

Unfortunately, UFOs are coming in and pulling the ship away with a tractor beam. Now a user
needs to shoot the UFO and quickly correct their position. Additionally, the captain is challenged
with possible fires on other ships. To go on with the mission, a user needs to put out fires on a
neighboring ship.

The AHTS VR Simulator was developed for HTC Vive. Our team used Unity, Blender for 3D modeling and 3dMax.

The simulator game was a great success during the display at CeBit 2017. Our customer is
planning to improve the AHTS VR Simulator over time, including making ergonomic changes to
the bridge, adding more monitors and new working instruments, enriching weather effects and
optimizing the ship motion model.