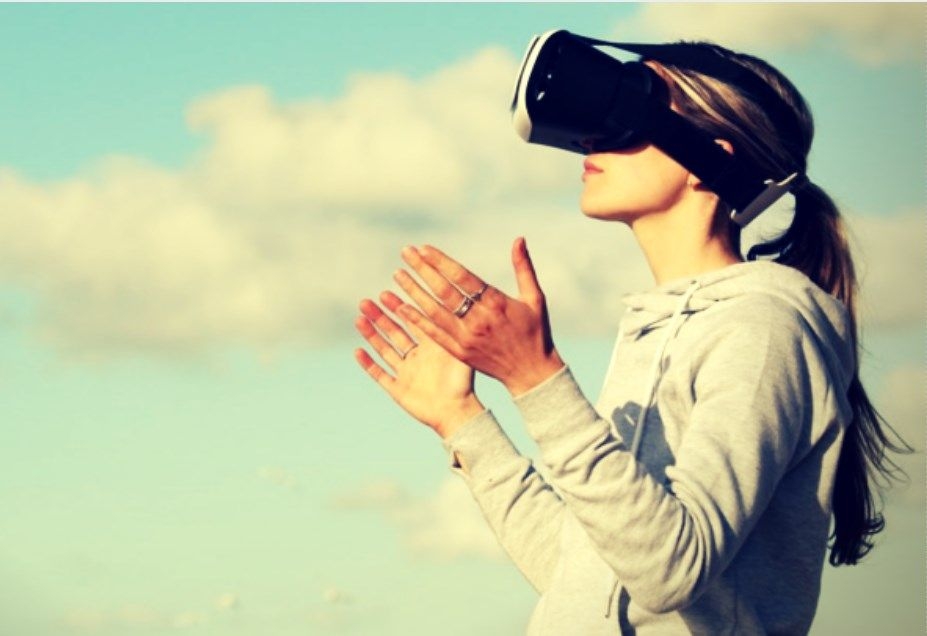 Virtual reality game development and VR environments no longer sound as a surprising or brand-new app technology. Even more, technology giants, such as HTC, Google, Microsoft, Samsung, Facebook and Sony have all contributed to this industry’s development and introduced their own virtual reality headsets that provide an immersive game experience.

2022 was marked as the year when many such high-profile VR headsets were introduced, giving rise to VR game development and setting even higher expectations and hopes for VR technology. As noted in the annual survey prepared by the Games Developers Conference for 2022, the interest in VR development as a sustainable business will remain very high.

By the way, we used some of these VR headsets in the development of our projects, which can be found in our portfolio.

According to the report generated by the Games Developers Conference 2017, the number of companies that have shifted to the development of virtual reality games has doubled since 2016, going from 6 to 13 percent. The variety of available platforms has also triggered changes in platform preferences in the development companies this year. 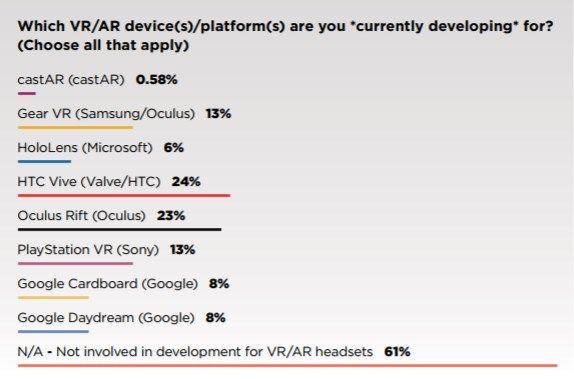 45 percent of survey participants among VR game developers distinguished HTC Vive as the most interesting VR platform for game development. Compared to a similar survey held in 2016, interest is shifting away from Oculus Rift (40 percent in 2016).

According to the same survey, the list of top VR/AR platforms and best VR headsets for game development currently considered as the most interesting look as follows: 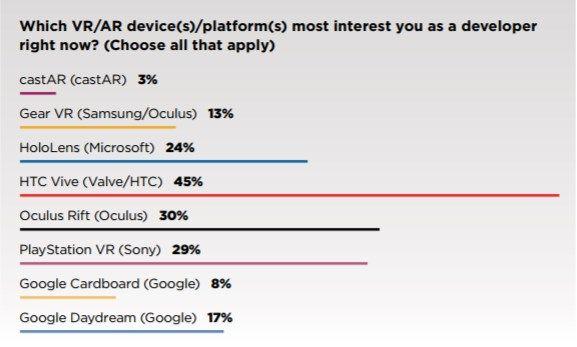 Below you can find some of the basic technical specifications for these best VR headset for developers: 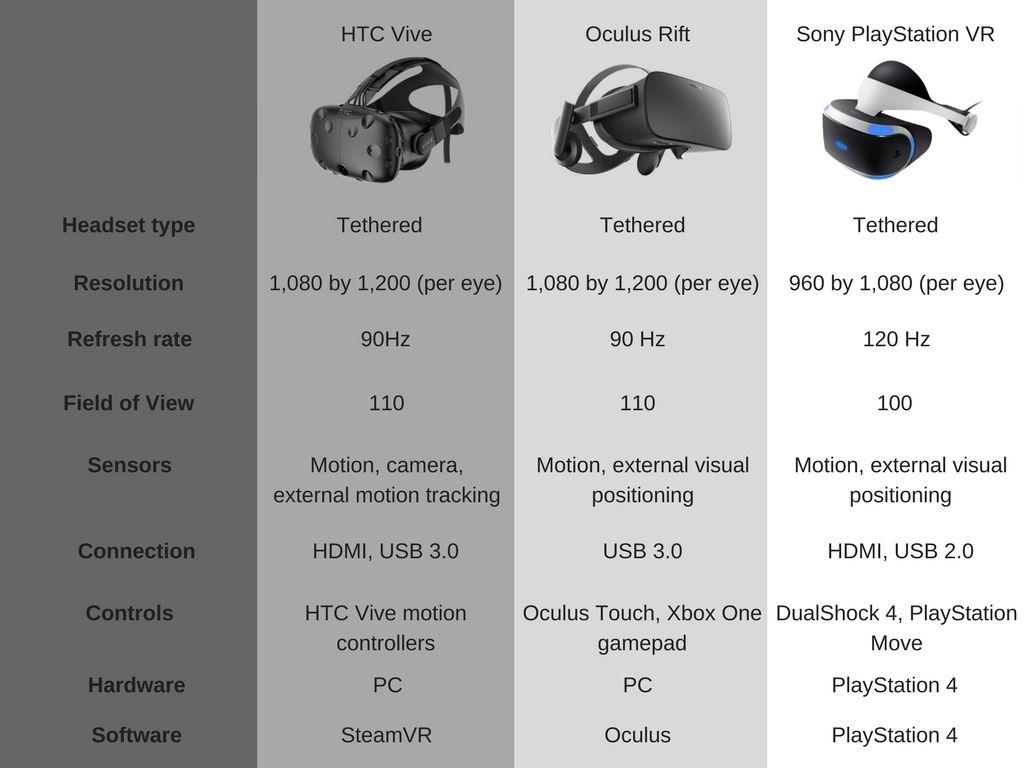 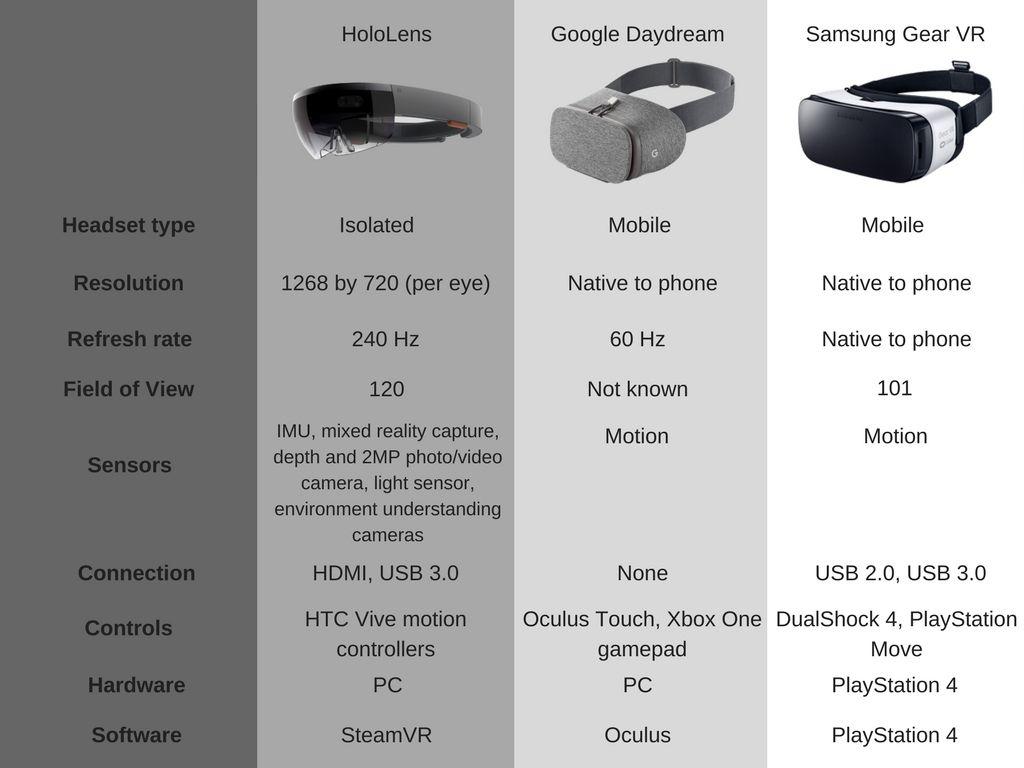 HTC Vive is the product that resulted in the collaboration of Valve, a giant PC game developer, and HTC, a hardware company. The VR headset provides a fully-immersive virtual reality experience with its external tracking sensors.

Read also: How to Create a Custom Marine Simulation Solution

There are several reasons to choose HTC Vive as your VR development platform and its current popularity is not a single reason for it. Valve owns Steam, a super large PC gaming platform, and also possesses a reputation of one of the most respected, creative and prosperous VR game development companies. Valve's hardware has no similar prototypes and is considered an innovative VR environment. HTC Vive is considered a developer-friendly VR development platform as it ensures seamless gaming experience and has an extensive developer network support.

Read also: How to develop a fantasy sports app

Oculus Rift is often identified with VR itself since the story of this VR headset dates back to its Kickstarter campaign in 2012, the time that signified spread of interest in virtual reality devices. Since then Oculus has turned into a trusted brand owned by Facebook. It came to the market long before other VR gaming platforms were introduced. Facebook provides a strong engineers’ support to help developers create VR games for Oculus Rift.

Sony’s PlayStation VR is most praised for providing a polished and easy VR experience. Although the Sony PlayStation VR headset hit the market at the end of 2016, it maintains a strong base of fans that relies on the brand’s history. 15% of game developers are ready to create their games for this headset.

PlayStation is deemed as a virtual reality gaming platform that is easy for development and distribution due to its use of a single set of hardware specifications. It is the only VR game platform that steadily nurtures game developers, provides funding to support new partnerships and development projects, and also helps make more VR games compatible with the device. Read Also: How to develop an AR app and how much does it cost

Microsoft HoloLens got onto the list of most popular gaming development platforms while actually being an Augmented reality viewer, not VR. HoloLens is untethered and self-sustained and allows building high-quality holographic experience apps. Read also: Revolutionizing Movie Industry Through VR Movie Apps

Unlike VR platforms, it was introduced as a device that accommodates not only games, but mainstream apps (e.g., Skype) too and, thus, can be used for all kinds of daily activities, not restricted by entertainment. A contest for developers hosted in May 2017 by Microsoft and Unity revealed their interest in turning HoloLens into an AR device that resolves real-life problems and makes it useful rather than focuses only on fun. Read More: Create your own VR training simulator

With Google's Daydream View, you place your phone into a VR headset that functions as your display and provides a high-quality VR experience for games and apps that can be downloaded from the Play Store. The lenses separate the screen into two images. Actions are controlled with the help of a pairable remote in your hand.

Once Daydream got to the market, Netflix, HBO and Hulu have created apps for it. Not all phones support Daydream View, but during Google IO 2017 it was confirmed that Daydream View is going to go through a transformation, where to get a VR experience, a user will no longer need a phone, computer or cables. The Virtual Reality headset will include all parts that provide a VR experience.

It is a VR development platform that resulted in a partnership between Oculus and Samsung and is often regarded as an affordable option for Oculus Rift among low-end VR platforms.

Samsung Gear VR headset will work for game developers who are not looking to create high-end VR experiences and are only making their first steps in virtual reality game development. The library of apps and games for Samsung Gear VR is solid, though they don’t work on all phones. Regular improvements made to the headset enhance the immersion experience and add the potential of turning VR into a mainstream movement.

Each of the VR gaming platforms reviewed above offers sufficient support to game developers, has its own approach to marketing and beating the competition. The VR development platforms target different levels of virtual reality experience, going from those that are struggling to provide the most realistic experience to gamers (HTC Vive), and to those that focus on inexpensive solutions (Samsung Gear VR), and even those who wish to add value to VR/AR by making it useful for everyday problem-solving.

Predicting the winner in this VR race is not possible since the trends have already shown that leaders can easily change if one of the competitors can offer a better and stronger feature that will be warmly welcomed by VR game developers.

What is the top 3 best VR headsets for developers?

We believe that the best trio of VR headsets for developers are HTC Vive, Oculus Rift, and Google Daydream View.

Which VR headsets work with Unity?

The best VR headsets that work with Unity are Gear VR, Oculus Rift, and HTC Vive.

How long does it take to develop VR training content?

Development of a virtual reality project using a VR headset can take from 1 to 8 weeks or more depending on the size of the virtual environment, the number of interactions and other factors.

VR/AR
How to Hire Developers for VR and AR Projects